There was a day (not that long ago) when kettlebells were reserved for Hulked-out bros and go-hard-or-go-home CrossFitters.

Fortunately, that day is over, and women are cozying up to kettlebell training in a big way. “Whether your goal is to gain strength, gain muscle mass, or increase your aerobic capacity, kettlebells can help,” Anna Swisher, Ph.D., director of education and performance at Eleiko, tells SELF. “You can do a killer workout in your living room, garage, or outside with nothing more than a handful of kettlebells and 30 minutes of your time.”

Case in point: In one small American Council on Exercise–sponsored study of 10 people, people performing the kettlebell snatch burned more than 400 calories in just 20 minutes. Another study of 40 people, published in The Scandinavian Journal of Work, Environment & Health found that when sedentary workers completed 20-minute kettlebell workouts two to three times per week for eight weeks, they cut their lower-back pain by 57 percent and their neck and shoulder pain by 46 percent.

After all, thanks to the kettlebell’s less-than-stable design, exercising with one fires up multiple muscle groups at once—especially those of the core, which we use for balance—helping to teach your body to move as one functional, rock-hard unit.

“Kettlebells add variation and allow you to work different movement patterns than is typical with barbells and dumbbells,” Swisher says. “Mixing up workouts with kettlebells can make workouts more fun, keep you motivated and engaged, and well-rounded.”

Unfortunately, for all of the benefits and popularity of kettlebell training, there isn’t a whole lot of good information out there for women on how to approach kettlebells in a safe and effective way. The result: Women are squatting their kettlebell swings, tweaking their backs, and forgoing a lot of their potential fitness gains.

Here, two awesome female experts share the most common mistakes women make when training with kettlebells—plus, how to adjust your training for the results you want.

“Women typically select kettlebells that are too light and underestimate their own strength,” Swisher says. “For an exercise such as a kettlebell swing or goblet squat, women should make use of their strong legs and not be afraid to use a heavier weight.” Going too light not only shortchanges your results but can even encourage poor form, which more often than not ends in overuse injuries, says Karen Smith, a master kettlebell instructor with StrongFirst, a Nevada-based trainer certification program. “If you’re using too light of weight in a kettlebell swing, for example, it’s easy to squat and use your arms to lift the bell, rather than power the move with your hips,” she tells SELF. “And when you aren’t using your muscles in the proper way, that’s when you get hurt.”

Train right: “When you’re just getting started, select a weight that you can do for several sets of five to 15 repetitions with good form,” Swisher says. “If you can’t do at least five repetitions of an exercise with perfect technique, use a lighter weight. Generally, if you can do 20 reps and not break a sweat, select a heavier kettlebell.” Another great cue: When you’re performing kettlebell swings, the weight should end straight in front of your shoulders with the bottom of the bell pointing directly away from your body. If the bottom of the bell is swinging so much that it ends pointed diagonally up toward the ceiling, you need to go heavier.

2. Swinging through the back

The kettlebell swing is a hip exercise, not a back exercise—so stop treating it that way. “A dangerous mistake I often see is people trying to swing the kettlebell too low, resulting in a bottom position where their chest it totally parallels to the floor. The lower the chest gets—the hips move back and the chest goes down—the more force is placed on the low back,” Swisher says. “Another way the kettlebell swing can cause excessive load on the spine if you do not keep a neutral spine throughout the entire range of motion.” She notes it’s far too common to see people hunching the upper back in the bottom position and arching their lower back at the top of the swing.

Train right: “It’s important to always hold a neutral spine, brace through the torso, and to control the path of the kettlebell,” she says. “As kettlebells get heavier and heavier, they want to pull you forward and down. The kettlebell should pass through your legs at about knee height when done properly.” To make that happen, keep your core tight—like you’re about to get hit in the gut—throughout the entire exercise and don’t send your butt back behind you until the kettlebell lowers close to your body. Think: tight and controlled, always.

3. Bending over to unrack and rack the bell

Similarly, when women pick up and put down (in exercise speak: unrack and rack, respectively), a lot fall prey to the thinking, “This isn’t actually part of my workout.” But it so is. Picking up bells and carrying them across the gym floor is an exercise in itself, and if you just hunch over and sling them up, you can overly stress the spine and surrounding muscles.

Train right: “For any load, the best way to pick it up is to keep it directly in line with your body’s center of mass, which usually means keeping it in line with the feet,” Swisher says. “For any overhead or upper-body exercise, it’s a good idea to squat down and pick up the kettlebell between your feet and raise it as close to your body as possible. Lower it the same way.

For an exercise like a kettlebell swing, place the bell a foot or two in front of you and from a squat stance with a tight midsection and shoulder blades pulled back, bend down to grasp the handle and swing it back between the legs to begin the first rep. Place the kettlebell back on the ground in the same position after finishing the last rep or simply stand up holding the kettlebell at your waist and lower down in a squat to the floor.”

4. Performing too many reps with not enough rest

High-intensity intervals are great, but when it comes to kettlebells, pushing yourself to the edge has one huge downside: When muscle fatigue builds up form breaks. It’s no fault of the exerciser. It’s just how physiology works, Swisher says. So, if you’re trying to perform balls-to-the-wall intervals or AMRAPs (as many reps as possible) with kettlebell swings, chances are that after enough reps you will start to make the above technique mistakes—no matter how excellent your form was on rep number one.

Train right: If you’re vying for strength gains, go ahead and give yourself a full two minutes of rest between sets, Smith says. If you’re more interested in conditioning and burning calories, and therefore, continually moving without rest, it’s important to stop your sets as soon as you feel your power levels dip—before the bad form has a chance to really set in. “It’s important to listen to your body,” she says.

Save your running shoes for running. “Pushing into a mushy surface greatly reduces the force transfer; therefore, cushioned, squishy shoes or those with air in the soles are not ideal for performing exercises such as squats, swings, and other moves that require pushing forcefully through the foot,” Swisher says. Meanwhile, the higher your foot is from the floor when kettlebell training, the greater your chances of rolling an ankle.

Train right: “For whole-body movements done from a standing position, footwear should have a solid, firm sole,” she says. “Weightlifting shoes typically have a solid heel, which provides a stable base to allow for very efficient transfer of force. If you don’t want to spring for lifting shoes, pick a low-profile running shoe with a totally solid sole and not a ton of cushioning.”

“Too often people go on YouTube and see kettlebell exercises that look fun or crazy and they start with them. That’s when injuries happen,” Smith says. “Even the windmill. A lot of women want to start with it because it looks pretty and beginner-friendly. But it’s actually a level-two exercise—not something to start with.”

Train right: One of the best starting places for kettlebell newbs is the two-arm kettlebell deadlift. “Master the hip hinge before you perform it at high speeds with the two-handed kettlebell swing,” she says, noting that it’s also important to practice single-arm KB deadlifts before attempting one-handed swings. From there, you can slowly build to take on other more complicated hip-driven movements such as cleans, snatches, and get-ups.

Buy on Amazon
You may also like to read 8 Kettlebell Exercises For Weight Loss
Source:

2019-04-14
jdmac2017
Previous: Several Opportunities That Are Related To Kettlebell Weights 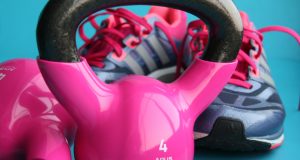 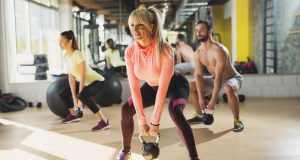